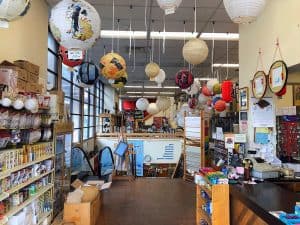 Soko Hardware has been operated by four generations of the Ashizawa family. First Masayasu and Naka, then their son and daughter-in-law Masao and Agnes Ashizawa and then their grandson and granddaughter-in-law Philip and Eunice Ashizawa who manage the store today. Philip and Eunice’s son, David Ashizawa, daughter, Lauren Ashizawa and nephew, Aaron Katekaru are the fourth generation of Ashizawas who have worked or are currently working at the store.

With the exception of World War II, when the Ashizawa’s were sent to Topaz, Utah, the store has been in operation every day except Sundays. In addition to carrying all the typical hardware items, Soko Hardware also carries tools, housewares and gardening supplies unique to the Japanese culture: e.g. butsudans (Buddhist shrines for homes), nomi (Japanese chisels), Japanese whetstones, pull saws, seeds, yanagi-ba (Japanese knife), sake bottles, masu, shoji paper, etc., just to name a few.